It is a non-destructive testing (NDT) method in which beams of high frequency sound waves that are introduced into the material being tested are used to detect surface and sub-surface flaws. The sound waves travel through the materials with some attenuation of energy and are reflected at interfaces. The reflected beam is detected and analyzed to define the presence and location of flaws.

Ultrasonic waves are almost completely reflected at metal gas interfaces. Partial reflection occurs at metal liquid or metal solid interfaces, with the specific percentage of reflected energy depending mainly on the ratios of certain properties of the matter on opposite sides of the interface.

Cracks, laminations, shrinkage, cavities, bursts, flakes, pores, bonding faults and other discontinuities that can act as metal-gas interfaces can be easily detected. Inclusions and other inhomogeneity’s in the metal being inspected can also detected by causing partial reflection or scattering of the ultrasonic waves, or by producing some other detectable effect on the ultrasonic waves.

Most of the ultrasonic inspection instruments detect flaws by monitoring one or more of the following: 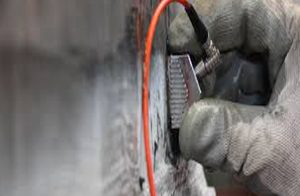