Radiographic testing is a non-destructive testing of components and assemblies that is based on differential absorption of penetrating radiation- either electromagnetic radiation of very short wave-lengths or particulate radiation by the part or test piece being tested. Because of differences in density and variations in thickness of the part, or differences in absorption characteristics caused by variation in composition, different portions of a test piece absorb different amounts of penetrating radiation. Unabsorbed radiation passing through the part can be recorded on film or photosensitive paper, viewed on a florescent screen or monitored by various types of electronic radiation detectors.

Industrial Radiography inspection is used to detect features of a component or assembly that exhibit a difference in thickness or physical density as compared to surrounding material. Large differences are more easily detected than small ones. In general, radiography can detect only those features that have an appreciable thickness in direction parallel to the radiation beam. This means that the ability of the process to detect planar discontinuities such as cracks depends on proper orientation of the test piece during testing. Discontinuities such as voids and inclusions, which have measurable thickness in all directions, can be detected as long as they are not too small in relation to section thickness. In general, features that exhibit a 2% or more difference in absorption compared to the surrounding material can be detected. Radiography is more effective when the flaws are not planar.

Radiographic testing is used extensively on castings and weldments. Radiography is well suited to the testing of semiconductor devices for cracks, broken wires, unsoldered connections, foreign material and misplaced components. Sensitivity of radiography to various types of flaws depends on many factors, including type of material, type of flaw and product form. Both ferrous alloys can be radio graphed, as can non-metallic materials and composites.

Compared to other NDT methods, radiography is expensive. Relatively large capital costs and apace allocations are required for a radiographic laboratory. Field testing of thick sections is a time consuming process. High activity sources require heavy shielding for protection of personnel. Tight cracks in thick sections usually cannot be detected at all, even when properly oriented. Minute discontinuities such as inclusions in wrought material, flakes, micro- porosity and micro-fissures cannot be detected unless they are sufficiently segregated to yield a detectable gross effect. Laminations are impossible to detect with radiography, because of their unfavorable orientation. Laminations do not yield differences in absorption that enable laminated areas to be distinguished from limitation free areas.

It is well known that large doses of X-rays or gamma rays can damage skin and blood cells, can produce blindness and sterility, and in massive doses can cause severe disability or death. Protection of personnel not only those engaged in radiographic work but also those in the vicinity or radiographic testing is of major importance. Safety requirements impose both economic and operational constraints on the use of radiography for testing. 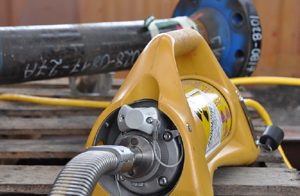